nebraska postcards
Southwest, Nebraska, United States
I will be posting views from Nebraska in the form of postcards from days gone by. It might be a view from 1910 or 1960. Please check back often ! Hi, my Name is Nathan and I am a full-time dealer in Antique Paper, mainly photographs and postcards.

Banks and Baseball in Nebraska on Postcards

Within the last year I purchased a large collection of Nebraska postcards in which the collector obviously had several main interests: Nebraska banks, Solomon Butcher, baseball, sports related views and Nebraska University Football. There were over 220 different views of banks for all over Nebraska and over 30 different views of small town Nebraska baseball teams.

Today I am posting a view of one of the smaller town's banks at Cedar Rapids, Neb and a view of a baseball team from Western, Nebraska, a small town in Southeast Nebraska.

Banks were an important part of Nebraska communities in the early years of a towns beginning. A bank meant that business and farming would be able to grow if a bank was invested in the town. Money deposited in the bank proved the town was growing and that the area had promise. Interestingly, the collection of banks represents many different types of banks: National Banks, State Banks, County Banks, Merchants Banks, Farmers Merchants Banks, German Banks, Commercial Banks and Banks with independent names representing a name or town. 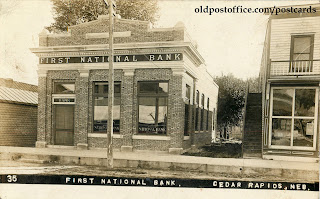 The First National Bank at Cedar Rapids doesnt appear to be in operation today but I wouldnt be surprised if this sturdy little brick building is still standing. This real photo postcard was mailed in 1910 and was probably created by Gustav Olson of Plattsmouth, Neb (Olson Photo Company).

I am selling a collection of 170+ bank related postcards with a retail value of over $3600 for $2100. Contact me if interested. 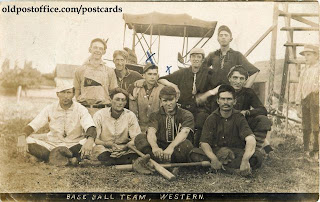 This view of the baseball team at Western, Nebraska was mailed in 1909. Baseball has been America's past-time for many years going back to the mid 1800s. We see views of these local town teams in competition with neighboring communities during the golden era of postcards circa 1910. My favorite views like this shows the men with their occupation on the front of their baseball jersey. One such card had men with "Butcher, Baker, Blacksmith" and such, on the fronts of their shirts. I have seen other cards with the names of businesses on the front as a form of advertising for such establishement. Western is located in Saline County near the communities of: DeWitt, Dorchester, Swanton, Tobias, Wilber, Friend, Crete and Fairbury.

Other baseball postcards from Nebraska are available. Contact me for a list of towns I currently have available.
Posted by nebraska postcards at 5:01 PM No comments: 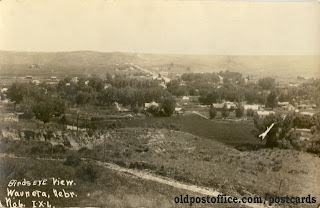 This real photo postcard was taken from a hill looking down onto the quiet community of Wauneta, Nebraska in the early 1920s. Card was produced by the I-X-L Photo Co., (which I recently learned was out of Sterling, Colorado). This card was mailed in 1925 and is part of a collection of Wauneta postcards that I just added to my website. You can view them all here.

Wauneta is located in Southeastern Chase County along Highway 6 in Southwest Nebraska. A nice, well-kept little community. Wauneta sits on the banks of the Frenchman River which winds through a valley from Enders to near Culbertson, Nebraska. Home to the Wauneta Roller Mills (recently added to the National Register of Historical Places).

Wauneta's town-site was surveyed and platted in 1887. It is a an agricultural area with lots of wheat, corn and cattle. If you ever get through SW Nebr on your way to Colorado you can take a drive up Highway 6 starting just West of Culbertson up through Imperial and then on into Coloroado catching I-76 at Sterling and then on to Denver. It is a nice peaceful drive with a handful of small communities along the way.

Chase County is home to the following communities: Wauneta, Enders, Lamar, Champion and Imperial. Other towns in the vicinity are Palisade and Culbertson.
Posted by nebraska postcards at 4:10 PM No comments: 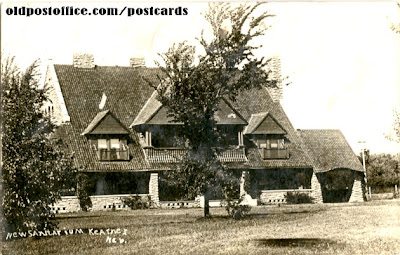 Here is a real photo postcard showing the Frank Mansion at Kearney, Nebraska by Solomon Butcher sometime before 1907. At the time this postcard was produced the building was being used as a Sanitarium.

Construction of the Frank House at Kearney, NE begain in 1886 and was completed in 1889. Built by George Washington Frank the house is made of red Colorado sandstone, with English golden oak interior paneling and lumber, and handcarved woodwork and had ten fireplaces (six remain today). Ten years after Edison invented the light bulb, the house would be the first house west of the Mississippi to be wired for electric lights during construction. The house even features a 5' x 10' Tiffany window. Other modern conveniences in the house included two bathrooms, steam heating, built-in closets (20 of them), and servants quarters. George's son, George William Frank, Jr. designed the house for his parents based on the H.H. Richardson Romanesque Shingle style.

George Washington Frank was born in New York state in 1830. Prior to his arrival to Kearney in 1885, he had been a partner in a bank in Corning, Iowa. After his arrival in Kearney, Mr. Frank began a major role in the development of the city. As president of the Frank Improvement Company, his projects included completion of the Kearney Canal, an electric power plant, and an electric railway system. The house was constructed to entertain Eastern capitalists for these industrial interests.

George first came to the Kearney area in 1871 or 1872 on a business trip where he purchased 1042 acres of land from the Union Pacific railroad. He had first heard about the area from his cousin, Col. W.W. Patterson, an employee of the C.B. & Q. railroad who was charged to locate a suitable place to create a junction between the C.B. & Q. and the Union Pacific RRs. Col. Patterson surmised that the Platte River and its underground water supplies could be used to create electrical power and irrigated farming lands. Patterson along with the other founding fathers of Kearney formulated the plan and began work on the Kearney Canal. George Frank invested in what became the Kearney Canal in 1885, purchasing 80% of the companies stock. His company completed construction of the canal in 1886. The opening of the canal allowed Kearney to be transformed from the desolate prairie and small fort that George had seen in 1871/72 to a booming industrial town with over 100 manufacturers. The George W. Frank Improvement Company ran the power plant and canal and an electric street car system.

The depression and financial panic of 1893 followed by a drought in 1894 bankrupted the Franks and much of the industry in Kearney. George Sr. now in his seventies and in poor health lost his fortune and his assets were divided among his investors. Phoebe died in February of 1900 at the age of 68. George moved in with family in Lincoln, NE, where he died in 1906 at the age of 76.

The Franks lived in the house from 1890 to 1900. After the Franks, the house was owned by Dr. Grothan who operated a private sanitarium in the house. In 1907 the house was sold to the State and was accessioned to be part of the Nebraska Tuberculosis hospital. The house was used as quarters for the TB hospital staff until the hospital closed in 1971. At that time, the buildings were transferred to Kearney State College and restoration of the house began. It was placed on the National Register of Historic Places in 1973. The house is open for tours during certain times of the year. Go here for more info.
Posted by nebraska postcards at 2:55 PM 1 comment: 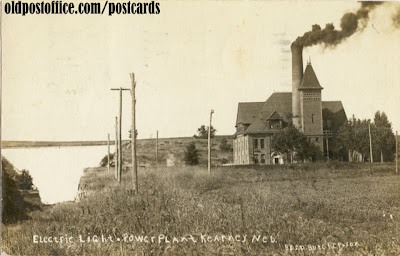 This real photo postcard was produced by the famous Nebraska photographer, Solomon D. Butcher. This is one of about 450 photos in a collection that I had put together from 2000-2007. I have since parted with them but do have scans of each and would like to some day do a book on Butcher and his postcards.

This particular view shows the electric light & power plant at Kearney, Nebraska sometime around 1900-1908. The building was built in the early 1890s by the Frank Impovment Company which was run by George Washington Frank. Frank was instrumental in many of the community's early economoic development projects. Tune in again this week for another post about Frank and the exquisite house he built at Kearney.

On the morning of November 27th, 1900, a disaster in the making was discovered. Workmen arriving noticed water coming through the embankment above the power house. After trying to stop the flow of water, help was summoned from town. Townspeople and local farmers swarmed to the area to try to stop the enevitable from happening. They were unsuccessful as the flowing water eventually succeeded in destroying a portion of the building pictured. It was rebuilt and in operation until at least 1909. You can read more about the disaster and history of the power projects at Kearney here. There are also a number of pics showing the result of the disaster and future water projects that were constructed in the 1920s. (I am not certain but I believe the canal was to the Northwest of where the University of Kearney is now located).

If you are interested in Kearney postcards please visit my website where you will find a number of wonderful cards offered.
Posted by nebraska postcards at 10:52 AM No comments: 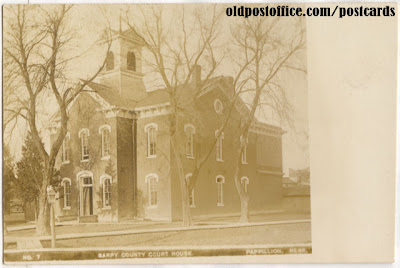 Here is a photo postcard showing a view of the Sarpy County Court house at Papillion, NE around 1908. The structure reminds me of some of the earlier brick school buildings in Nebraska built around the same time. Note the incorrect spelling of the town on the postcard. Papillion photo postcards (and cards from there in general) are fairly tough to come by. I believe most of the photo postcards I have seen from there were produced by Olson of Plattsmouth, NE. I appreciate his work and might write a bit about him in the future, so keep tuned.

Sarpy County in Nebraska is among the oldest counties in the state and was organized in 1857. Bellevue was the original county seat, but its designation was moved to Papillion in 1875. Following the change to Papillion, a modest brick courthouse was constructed but by 1921 it was deteriorating and deemed inadequate. In that same year voters approved a bond issue for a new building. Construction began in 1922 and in 1923 the Classical Revival-style courthouse was completed. That building has been added to the Nebraska National Historical Register in 2005 and can be seen here.

I have had the opportunity to help a number of collectors in their pursuit of acquiring all of the 92 or 93 County Courthouses from Nebraska. This can be accomplished but there are a few of them which are a little difficult to find. Some collectors want any example, be it the original courthouse or the current courthouse, some want both. I also know of several collectors who collect courthouse postcards for all the entire U.S. One collector from Maryland has a wonderful website where you can view his collection of postcards from every State: http://courthousehistory.com/html/collection.htm

In 2002 a gentleman from Nebraska put out a book of all of the NE courthouses. He used a lot of postcards in the book which you can view here: Nebr Courthouse Book .

Posted by nebraska postcards at 8:29 AM No comments: